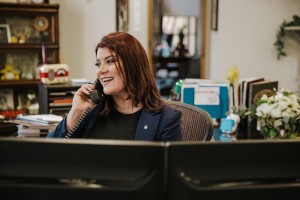 NEW BRITAIN—Mayor Erin Stewart presented on Wednesday to the Common Council a $242.51 million budget recommendation that calls for no tax increase, provides an additional $3.1 million to the Board of Education ($7.1 million total), and keeps the City’s $18 million Rainy Day fund untouched.

In March, the Board of Finance and Taxation recommended to the Mayor an increase in spending of 5.63 percent, or a $251.11 million budget, which would have required a real estate and personal property mill rate increase from 50.50 mills to 60.91 mills.

During the last several weeks, Mayor Stewart met with her finance team on a daily basis and went through the 870 line items contained in the City’s General Fund budget and made reductions from the Board of Finance and Taxation plan amounting to $8.5 million. The changes included additional cuts to spending and added sources of revenue.

“We left no stone unturned,” said Mayor Stewart. “We made changes to more than 200 line items, including reductions to 122 areas. This is a balanced budget that has no tax increase and provides level funding to City departments, keeping things status quo. This will ensure continuity in the delivery of services, and maintain our quality of life.”

Some of the major contributors to the City’s increase in spending is a $4.5 million payment to the City’s medical self-insurance fund due to actual and projected claims as provided by the City’s insurance broker and a state-mandated payment of $1.5 million to the state’s Municipal Employee Retirement System. The City is also accounting for a $457,000 increase in medical premiums, $884,000 in contractual obligations, and $500,000 for shortfalls in overtime costs.

The Mayor’s 2019-20 proposal uses $529,000 from a Tax Stabilization Fund that was created in 2015, an anticipated increase in tax collection by $2.8 million, which was made possible by a third-party collection agency TaxServ and Tax Management Associates, and incorporates better than expected state aid revenues.

Additionally, the budget eliminates five positions, including an assistant fire chief, two telecommunicators, an equipment operator, and a parks foreperson.

Under the budget proposal, no new positions have been created and it funds the City’s obligations to its pension and self-insurance funds.

The additional funding to the Board of Education comes from a $3.1 million increase due to passing on the Special Education “excess cost grant” aid and $3,645,845 from state Education Cost Sharing grant due to a change in the state formula. This allows for the fully funding of the Board of Education’s original request that sought a $5,010,625 increase in spending. Under Mayor Stewart’s proposal, the Board of Education will receive $1,735,220 more than originally requested, while leaving the Minimum Budget Requirement untouched. The City is also starting to save money to pay into the teacher’s retirement fund as mandated by the state.

The Mayor’s budget now gets referred to every council sub committee: Administration, Finance, and Law; Planning, Zoning, and Housing; and Consolidated for council discussion. The Common Council must adopt a budget by June 5. A public hearing on the budget will be announced in the coming days.

Friday, June 21 event at the Blue Room in New Britain

END_OF_DOCUMENT_TOKEN_TO_BE_REPLACED 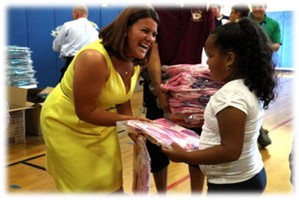 Video: Mayor Erin Stewart is Leading the Way with Compassion