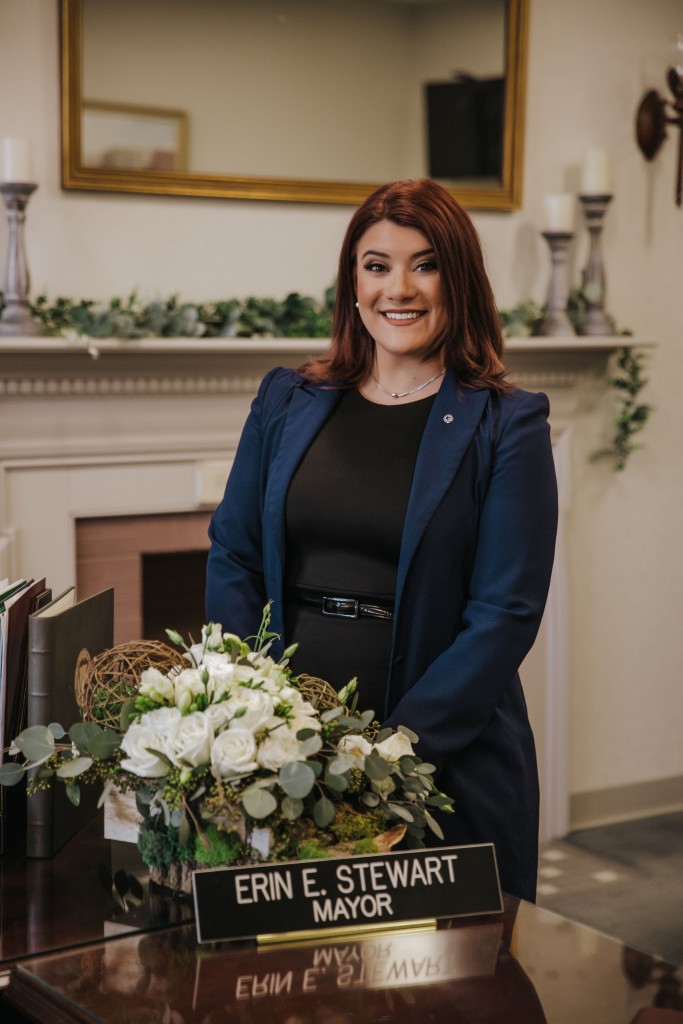 Mayor Stewart was born on May 4, 1987 in New Britain to Patricia (Badolato) and former New Britain Mayor Timothy Stewart, who served from 2003 to 2011. Her uncle, the late State Representative Dominic J. Badolato, represented New Britain in the Connecticut General Assembly for 22 years. Mayor Stewart’s entire family has a longstanding commitment to serving their neighbors in New Britain, and she is proud to continue that tradition.

Mayor Stewart has earned accolades for her leadership and results-driven style of governing. She closed a deficit of more than $30 million during her first term, increased the City’s Rainy Day fund to $18 million, and brought stability and responsibility back to the city’s finances. Under Mayor Stewart’s leadership, the City’s Standard and Poor’s bond rating has increased by four notches to “A+.” As a result of these efforts, Mayor Stewart and New Britain have been featured twice on the front cover of the Bond Buyer, the nation’s leading municipal finance newspaper as a model for other communities.

Under her leadership, New Britain is undergoing a dramatic economic turnaround. Over the last six years, the City’s Grand List has increased each year, due to the addition of new businesses like Costco, Polamer Precision, Addaero, Connecticut Cabinetry, the Alvarium Beer Co., Mofongo, YoYo Ice Cream, Five Churches Brewery, and dozens of others who have chosen to expand, relocate, or establish themselves in New Britain.

Mayor Stewart has leveraged the opportunities presented by the opening of CTfastrak in 2015 by creating a master Transit Oriented Development plan to turn vacant or underused parcels near the City’s three stations to create a community where people of all ages and economic backgrounds want to live, work, and play. Investments by the City have attracted numerous housing and development projects. One of these projects includes Columbus Commons, a $58 million mixed-use development featuring housing, retail, and office space at the site of the former New Britain Police Department, which is just steps from the City’s downtown CTfastrak terminal. The development is under construction and phase 1 is set to open in the fall of 2019. Mayor Stewart’s commitment to transforming these neighborhoods has attracted other developments in the downtown area, including the historic renovation of 57 Court Street, along with additional apartments on Main Street, West Main Street, and several other areas.

Mayor Stewart has also invested significant resources in helping New Britain’s homeless population through her creation of the Building Hope Together Task Force: New Britain’s Permanent Workplan to End Homelessness. By bringing city officials, clergy members, and social services providers around the same table, Mayor Stewart is not only continuing New Britain’s tradition of compassion for those less fortunate, she is intent on finding housing, treatment, and work for those who seek it. Building Hope Together has become a model for other communities that are tackling the issue of homelessness.

In November 2018, the City of New Britain partnered with the State’s Attorney’s Office and area service providers to create a coordinated pathway to treatment and recovery for individuals struggling with heroin and opioid addictions. Among the partners are: The New Britain and Berlin Police Departments, the New Britain Fire Department, the Hospital of Central Connecticut and Midstate Medical Center, Community Mental Health Affiliates, Wheeler Clinic, Rushford clinic, Corum Deo, the State’s Attorney’s Office, and New Britain EMS. Three months into the initiative, more than two dozen individuals have been provided assistance.

In addition to the H.O.P.E. Initiative, Mayor Stewart in January 2019 launched the New Britain Opioid Task Force to look at additional ways to prevent opioid-related deaths. The Task Force is led by the Mayor and includes members of the City’s Community Services division and Health Departments, New Britain EMS, CMHA, the New Britain Fire Department, and other partners. Committees will focus on collecting and sharing data, a public information campaign, the development of online resources, applying for grants, offering
community Naloxone training sessions, and more.

In January 2016, Mayor Stewart launched an Energy and Innovation Committee (now known as the SMART City Committee) as a way to make New Britain a “SMART City.” The goal of the committee is to reduce the cost of government, harness new technologies, and make more efficient use of existing resources. Projects recently implemented include a redesigned City website, a large solar array at the Shuttle Meadow Water Treatment Plant, electric vehicle charging stations, a fuel cell at New Britain High School, LEDs in City buildings, free downtown wireless internet, downtown parking meter upgrades, and more. Other initiatives have included a mobile app called SeeClickFix that allows residents report a pothole or other issue directly to Public Works, upgrading downtown traffic lights so they can be realigned in realtime, and a free textile recycling program. Mayor Stewart has also hired a new energy manager, who is working with the City’s facilities manager to reduce electrical costs by at least 10 percent.

Under the direction of Mayor Stewart, the City of New Britain now has a full time fleet manager, which oversees the City’s 349 vehicles and equipment. In February 2019, the City released it’s latest Fleet Report, which details the City’s continued reduction in the number of City vehicles on the road over the last three years, along with a decrease in fuel consumption, among other changes.

In February 2016, Mayor Erin Stewart issued a memorandum establishing a goal to reduce the size of the City’s fleet by 5 percent in an ongoing effort to streamline and reduce the cost of government. Since then, that goal has been exceeded, as the fleet has been reduced by 35 vehicles—a 10 percent reduction.

Mayor Stewart never passes up an opportunity to inspire other individuals—especially City youth and females—to develop the confidence and leadership qualities they need to grow and give back to their community or organization. A former volunteer New Britain High School softball coach, Mayor Stewart has been a keynote speaker at the Connecticut Business and Industry Association’s When Women Lead conference, a repeat speaker at Central Connecticut State University’s Elect-Her series, a frequent guest at the YWCA’s House of Teens program, and a frequent visitor to area schools where she is proud to instill a lifelong pursuit of learning.

Mayor Stewart continues to be humbled by the recognition she has received for her service and leadership. In 2014, she received the Women’s Leadership Award from the Connecticut Republican Party. Also in 2014, Connecticut Magazine named her one of their “40 Under 40,” and the New Britain City Journal named her their “Person of the Year.” The Greater New Britain Arts Alliance has also awarded Mayor Stewart “Public Servant of the Year.” For her work in spreading awareness about domestic violence, the Connecticut Coalition Against Domestic Violence honored her with a “First 100 Plus” award in November 2015. She has been the subject of in-depth profiles by national media outlets like the New York Times, Cosmopolitan, Time Magazine, and Newsmax, which in January 2016 named her to the top of their “30 Most Influential Republicans Under 30” list.