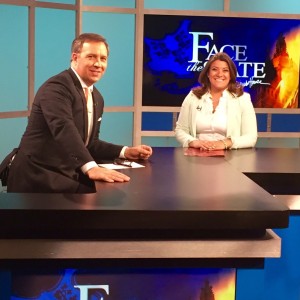 NEW BRITAIN — The political pundits who had their money on Mayor Erin Stewart challenging Elizabeth Esty for her seat in Congress this fall found themselves swiftly defeated Sunday.

In an eight-minute appearance on WFSB-TV’s “Face the State,” Stewart did, however, leave the door open to a gubernatorial run in two years. She told host Dennis House she is confident she could serve as Connecticut’s chief executive but has not put a great deal of consideration into a strategy leading to the Capitol. The only political objective she has for certain is seeking a third term as mayor in 2017.

House told Stewart her name has been invoked on several occasions when politicians or journalists consider potential 2018 gubernatorial candidates. “I have heard that quite often myself and I’m extremely flattered by that. I’m glad people have the confidence in me and think I’m capable of doing the job,” Stewart said. “Do I think I could? Absolutely. Am I there yet? I’m not sure. I still have another election in New Britain in 2017 that I will certainly be going for. My job’s not done in New Britain yet. And whether I can bring those talents to the state remains to be seen but I’m certainly not ruling it out.”

Stewart said Danbury Mayor Mark Boughton and Trumbull First Selectman Timothy Herbst are likely to jump into the next governor’s race and it may be the right time for the heavily Democratic state to go red. “But the Legislature has a lot to do with it as well,” she said. “How many decades has it been that the Legislature has been Democratically controlled and we haven’t really seen a lot of progress? Look at where we are today. I think there has to be a good balance of power.”

Stewart said the more imminent political race — to the White House — will be won in New Britain by the candidate whose message ultimately resonates with urban voters. “What you’re seeing is a lot of the Latino and Hispanic communities come out in support of a lot of Donald Trump’s policies. I’ve seen that in New Britain and heard from our Latino coalitions that are leaning towards supporting him,” Stewart told House. “I’ve also heard from a lot of people that say they’re not voting at all because they don’t like either candidate.”

Stewart did not — and was not asked to — endorse a presidential candidate.

House and Stewart also discussed the city’s economic outlook, capital improvements endeavors and the mayor’s support of CTfastrak. House pointed out that she was one of the few state Republicans to back the controversial busway.

“I would be silly not to. You’re looking at the average population in New Britain that doesn’t have a car or they rely on public transportation to get around,” she said. “To see New Britain become a hub of public transportation was an incredible opportunity for the city to make a name for itself for the entire region. The city has had access to millions of dollars in transit-oriented development funds in the last few years because of the busway.”

Stewart detailed the construction and redevelopment projects around the bus line into the central business district, work that she said inspires new business. She told House corporations as well as mom-and-pops have been drawn to the Hardware City and in the last year, 34 new businesses have established themselves in the city, creating over 600 new jobs.

“People want to invest in cities that are investing in themselves,” said Stewart.

Christopher Fortier can be reached at 860-801-5063 or cfortier@newbritainherald.com.

END_OF_DOCUMENT_TOKEN_TO_BE_REPLACED

Mayor Erin Stewart received resounding support from the 41 members of the Republican Town Committee for another term and support for her slate of candidates.