In New Britain, A Rookie Mayor Makes Her Mark

‘Sometimes It’s Really Tough To Be A Mayor Who Is A 27-Year-Old Female Republican. There Are A Lot Of Stereotypes To Deal With’

NEW BRITAIN — When she was campaigning last fall, Erin Stewart promised voters that she wouldn’t be a “business as usual” sort of mayor.

In her first 10 months in the city’s top office, she’s made good on that vow. 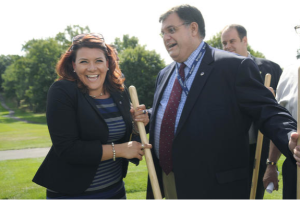 Stewart has navigated a political maze to resurrect the stalled Costco project, endured a high-profile setback with the defection of the Rock Cats, and scored a public relations coup by her hardball pressure on the minor league baseball team to pay a $164,000 tax bill.

In a socially conservative city that largely ignores the digital and the faddish, Stewart has scored points — and lost some — through Twitter and selfies.

Her playful Tweet dismissing early reports of the Rock Cats’ departure backfired badly, and two bloggers have been blistering in their criticism of her offhand remarks and ultra-casual, off-duty photos on Facebook and Twitter.

But Stewart’s cheery cellphone photo at President Obama’s visit in March earned praise from voters across the political spectrum who were surprised by a Republican mayor openly welcoming a Democratic president.

“You have the sitting president of the best nation in the world in your town, you’re damn right I’ll be excited about it,” Stewart said in a recent interview, displaying a decisive — but never rancorous — tone that’s marked her first 10 months in office.

As New Britain’s second female mayor and its youngest, Stewart has faced a few challenges that her middle-aged male predecessors never saw.

“Sometimes it’s really tough to be a mayor who is a 27-year-old female Republican. I hear I’m a party girl, I’m wild, I’m not smart enough to do the job,” she said. “None of it’s true. I’ve been told ‘Little girl, you can’t handle the job.’

“I’ve had to reason with people who just go by how I look. One lady told me I should cut my hair — it looks too provocative. I like my hair, I’m going to keep it,” Stewart said. “There are a lot of stereotypes to deal with. I go through a lot of Advil.”

Stewart readily acknowledges there’s been plenty to learn since November, when she defeated Tim O’Brien, the Democratic incumbent and a career politician.

“I don’t think anyone with more years of experience could have anticipated the things that happened since then,” she said. “There’s no textbook or college class to prepare you. You’re constantly jugging three balls in the air. You’re mayor and town manager, then you go to events and kiss babies and take pictures.”

Stewart has limited experience to fall back on. She has been a legislative aide at the Capitol, and previously served in just one elective office, a single term on the school board. But she said she consults often with many of the seasoned politicians and managers who worked with her father, former Republican Mayor Timothy Stewart, who served four terms.

“You surround yourself with good people and they’ll give you good advice. We talk with people who’ve been in government, and put our younger spin on it,” she said.

“I’ll take advice from some past mayors — Lucian Pawlak, and Mayor [William] McNamara. And I’m asked, ‘Do you call your dad for advice?’ God yes! It doesn’t mean I take it all the time. But I’m very proud of the work my dad did.”

Unlike her father, she works to avoid public confrontations. At a public meeting in August, she was openly dismayed as the Democratic council voted down her plan to sell a water department well, but nevertheless said nothing and moved to the next agenda item seamlessly.

“I’m as much my mom as I am my dad. I have my father’s passion and my mother’s compassion,” she said.

“I like a good argument,” she said, “but I like to have conversations such as that behind closed doors, out of respect to the person. Otherwise in a debate, sometimes you might say something you don’t mean. It’s easy to start name-calling, and it’s important not to get caught up in that.”

Democratic Alderman David DeFronzo, rumored to be her most likely challenger in 2015 if she seeks re-election, credits Stewart for setting a tone of civility.

“Even though she and I have disagreed on some major issues, she’s made a good faith effort to work with the council,” he said. “I’m hopeful that will continue for the remainder of her term. I would have no problem talking with her or [Chief of Staff] John Healey about anything that comes up.”

Among the setbacks in her first months on the job was education funding, always a controversial topic in this impoverished city.

Stewart fought the school system’s contention that the city had to put forward an extra $4 million this year. She declared that educators had misinterpreted state law, but she ended up conceding that they were right — and that the city now has to come up with the additional money before June.

From the bigger perspective of the overall city budget, Minority Leader Willie Pabon praised Stewart for making progress despite inheriting a massive deficit and a council with more than a few political adversaries.

“So far she’s doing a great job with the hand she got dealt,” said Pabon, who had been considering running for the Republican mayoral endorsement last year before Stewart decided to run. “She did great work with Costco.”

Stewart said she’s convinced that providing more than $2 million in tax abatements to get Costco to build a warehouse store in New Britain was the right move, and she’s proud of maneuvering through some Democratic opposition to get the measure passed.

“This means 250 jobs with good pay and insurance. I’m told there will be nearly 400 construction jobs,” Stewart said. “We need that so desperately — this city has higher unemployment than the state average or the national average.”

Critics suggested that Costco was bluffing when it said it would look elsewhere unless it got tax breaks. But Stewart said securing a major new employer offering quality jobs and long-term tax revenue wasn’t something to gamble with.

“I gave the council everything they could ask for on that, every ounce of information we had,” she said. “I’m sure it’s hard for some of the council members to trust me. But I don’t give anyone a reason not to, and I expect the same from them. You’re going to know exactly where I stand, and I want the same: Tell me ‘yes’ or ‘no.'”

That’s exactly what the Rock Cats management failed to do this spring, she said. When reporters from The Courant told her in early June that the team was negotiating with Hartford to move out, she dismissed the idea and tweeted: “Spoiler alert: The Rock Cats aren’t leaving New Britain.”

Critics called her actions flippant and ill-advised, particularly since the team announced a day and a half later that it was, indeed, leaving. But Stewart said she doesn’t regret how she handled it, since the team’s management had been assuring her up to the last minute that the Rock Cats would be staying.

“I use social media to my advantage,” Stewart said. ” There’s a certain base of people who are my age and younger who don’t get their news from print or necessarily watch the news at 6 p.m. They go to social media. I’m still able to get the point across.

“Some will argue it has backfired — I don’t think so at all.”

Prominently displayed in her office is a sharply composed photo of her with Obama during his New Britain visit. The cellphone photo she took for her Facebook page shows her exuberantly giving a thumbs up while Obama stands several rows away.

“Some people called me a RINO [Republican in name only] for that, but I don’t care what you want to call me — you respect the highest elected official in the country,” she said.

“I could post something about how we’re revamping the 10-year plan on homelessness — someone will tweet back, ‘What’s your problem?’ or ‘What are you doing to help me?’ Some people oppose you just to oppose you.”

Her welcome of Obama earned her messages of support from other Republicans along with Democrats and unaffiliated voters.

Stewart has emphasized that she’s fiscally conservative, but not a follower of the socially right-wing policies of the national GOP. During her campaign, she held a fundraiser featuring state Senate Minority Leader John McKinney, a Republican. Some Second Amendment activists derided her choice, but she didn’t change anything.

Democratic Town Chairman John McNamara is eager for the chance to get a Democrat back into the mayor’s office next year, and criticizes Stewart for what he calls patronage hiring decisions and budget priorities that hurt the poor. But he acknowledges that her style of governing has brought her some fans.

“She’s her own person,” he said. “She’s not boxing herself in by always picking fights.”

To build relations with the council, she invited the 15 members to meet with her individually to discuss their goals for New Britain. And with each recommendation she sends them, she attaches a note explaining her position.

“I need to take some guidance from them — you can’t lead in a bubble,” she said.

Her first 10 months have had more than a few tough points, including her call for an 11 percent tax increase along with higher fees for services. The council adopted her plan, with some Democrats conceding she had made a hard decision that her predecessors — including O’Brien as well as her father — hadn’t.

FOR IMMEDIATE RELEASE: January 11, 2016 STANDARD & POOR’S UPGRADES CITY BOND RATING TO “A+” Agency sees continued improvements, commitment to balanced budgets NEW BRITAIN—Coming off the heels of a 2014-15 audit confirming a $14.9 million budget surplus, Standard & Poor’s Rating Services (S&P) has announced a positive upgrade to New Britain’s bond rating, increasing it to “A+” with a…