“This is phenomenal news and is a strong validation of the difficult financial decisions we have made over the past fourteen months,” said Mayor Erin Stewart. “A year ago, we were staring a $30 million-dollar deficit in the face and were being downgraded by the rating agencies following several years of mismanagement and overspending. Today’s upgrade by Standard & Poor’s is their recognition that we are doing our best to turn New Britain around, both financially and economically.”

Standard & Poor said the upgrade was based on several of the city’s actions, such as returning to a structurally-balanced budget and eliminating many items in the 2015 budget that are just one-time revenues, not sustained sources of income.

Mayor Erin Stewart announced in her 2015 budget more than $16 million in spending cuts and the elimination of more than 30 full-time jobs. There was also an 11 percent increase in taxes.

“A three-notch upgrade is very rare, especially coming on the heels of a downgrade last year,” said Richard Thivierge of William Blair & Co., the city’s underwriter. “It reinforces that the difficult decisions made by the mayor and supported by the Council were the right things to do.”

This article originally appeared on FOXCT 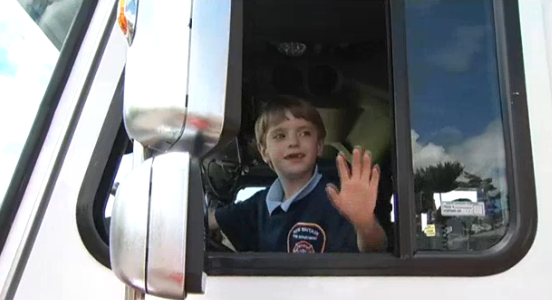 Six-year-old Connor Davis, who has autism, is a big fan of firefighters and has badly wanted to ride in one. On Friday, the New Britain Fire Department made his dream come true.