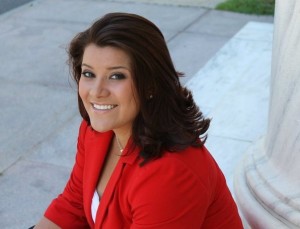 For New Britain mayoral candidate Erin Stewart, the city she hopes to lead has nearly a 40 percent Latino population, so Stewart, who is running on the Republican ticket, knows that capturing the Hispanic vote is key to securing a win. She realizes it is imperative she draw the attention of this segment of voters to her candidacy and assure them that she will act as their voice.

“It’s not about targeting any one group of people,” Stewart said. “The entire city is important to me. We are a city as a whole and every group of people matter to me. However, I am very well aware that the Latino population has grown exponentially over the past decade.”

New Britain’s Latinos are part of the city’s future, she said, and that should be enough to make all local politicians stop and listen. “When I see a population grow by that much I want to make sure that I’m listening to them and I’m well aware of their needs and have them know that they will have a seat at my table in moving New Britain forward,” she said.

She currently serves on the city’s Board of Education, and is quick to remind those she runs into on the campaign trail that she has spent all her life in New Britain, cares deeply for the city and that spending time with the Latino community is not new to her. She wants to make sure that New Britain residents do not judge her based solely on her affiliation, rather Stewart says she wants voters to know she is a candidate who knows the city well and will bring new ideas and energy to the job.

With recent Latino voting trends in Connecticut shifting from overwhelmingly Democratic to unaffiliated and Republican, Stewart’s targeted strategy has come at an opportune time, when securing Latino voters can make or break an election. While a small majority are registered as Democrats, close to half, or 71,488 of the 176,000 Latino voters listed by the Secretary of State’s office, are unaffiliated, and another estimated 14,000 are registered as Republicans.

New Britain is not the only place Republicans are honing in on the Hispanic vote. According to Zak Sanders, Connecticut Republican Party spokesman, there is a lot of room for growth for the GOP throughout Connecticut.

The GOP’s strategy is an attempt to forge a connection with Latino voters in a typically liberal-leaning state. They are currently working on a new outreach program in line with the national committee’s Growth and Opportunity Project, which directs attention to “communicating with the Latino community [the] shared values of equal opportunity and economic stability.”

The project is an effort to revitalize the GOP’s image, which they now wish to be synonymous with the “Growth and Opportunity Party.” “We need to campaign among Hispanic, black, Asian, and gay Americans and demonstrate we care about them, too,” the outreach report compiled by the national GOP on the project reads. It goes on to say, “We must recruit more candidates who come from minority communities. But it is not just tone that counts. Policy always matters.”

Sanders says, “The Latino community in Connecticut is full of active, engaged, and informed voters. Many of them share key values with the Republican Party; values of equal opportunity, hard work, and the importance of family and community ties. Sanders said he hopes the outreach efforts will give the GOP a stronger, more positive image in the eyes of Latino communities, especially in cities such as Hartford, Bridgeport, and New Britain.

The GOP outreach report goes onto say, “Hispanic Americans perceive that a GOP nominee or candidate does not want them in the United States (i.e. self-deportation), they will not pay attention to our next sentence. It does not matter what we say about education, jobs or the economy; if Hispanics think we do not want them here, they will close their ears to our policies.”

With a new focus by the Republican Party to identify with Hispanics in Connecticut, coupled with Stewart’s strides toward gaining Latino support in her mayoral race, state GOP leaders appear optimistic that their effort will show growth in the polls.

Meanwhile, throughout her campaign, Stewart plans to encourage more Latinos to get involved in both the state and local government. Connecticut currently has the most Hispanic state legislators in office in history, and Stewart hopes to maintain the trend. She recently attended the Puerto Rican Social and Cultural Festival in New Britain, where she says she knew many of the attendees but it gave her an opportunity to continue to strengthen the bridge between the Hispanic community and the City’s local government. During the event,she spoke with hundreds of Latino families about everything from education to healthcare.

Attending the event rewarded her with a “much stronger connection” with the Latino community in New Britain, she said.

She added that when it comes to the big issues in New Britain, her goal is an inclusive focus of the entire population, saying, “When we talk about education, for example, we are talking about improving education for Latinos, African Americans, Polish Americans, Asian Americans, everyone. That’s what all families care about. ”

This article originally appeared on ctlatinonews.com