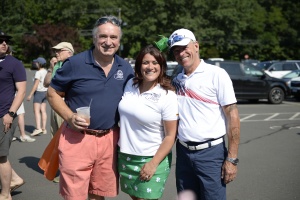 Nearly a decade of giving continues thanks to the community and some generous golfers.

In 2007, my father and former Mayor Timothy Stewart established the Mayor’s Trophy Charitable Fund in an effort to give back to the community. New Britain is blessed to have numerous youth sports teams, organizations, and after school programs. These groups operate on a shoestring budget and count on donations to ensure that any child who wants to participate can.

The Mayor’s Trophy Charitable Fund is held by the Community Foundation of Greater New Britain. One-hundred percent of all the tournament proceeds go toward the fund and they are never used for political purposes.

To date, we have given out more than $300,000 in grants to many recipients ranging from the New Britain High School Golden Hurricane Marching Band to the New Britain Police Athletic League youth athletic and cheerleading teams. We have also provided funding for community events like the Little Poland Festival and the Osgood Basketball Shootout, as well as important life-changing organizations such as the Cystic Fibrosis Foundation of Connecticut and the Connecticut Breast Health Initiative.

On Friday, July 26, more than 240 golfers came to New Britain’s Stanley Golf Course to take part in the charitable fund’s main fundraiser for the year: a day to golf for a good cause. This was our best year ever! We raised more than $30,000. It was amazing to see so many local businesses and community members come together for a day of fun, all to support New Britain families.

Thank you to all of our golfers and sponsors, including our title sponsor Stanley Black & Decker for their generous support. I thank you for believing in our mission to improve the quality of life for all of our citizens. You all helped to make the day a huge success! And over the years, many lives have been changed forever.

I know how important it is to give back to the community that gave to me. I am grateful to be able to raise money every year at this tournament to benefit the same programs and organizations that shaped my childhood growing up in New Britain.

To learn more about the Mayor’s Trophy Charitable Fund, contact my office at 860-826-3303. Small donations are awarded throughout the year by an application process and board review to New Britain-based 501c3 organizations.

Erin E. Stewart is the mayor of New Britain.

This article originally appeared in the New Britain Herald on August 5, 2019.

Mayor Stewart attended the Annual Youth and Family Services Breakfast. Congratulations to everyone who was recognized during this great event!

END_OF_DOCUMENT_TOKEN_TO_BE_REPLACED

Video: Alderman Rosado on Why He Stands with Team Stewart