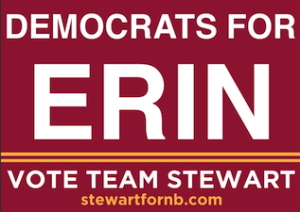 When an election takes place it is quite common to see a fight between Democrats and Republicans. This year is very different in the race for Mayor in New Britain as Republicans are not the only ones supporting Erin Stewart. Many high ranking Democrats have come forward to support her as well.

“She is a New Britain person. She has New Britain in her heart. She was born here and has lived here her entire life. She is not from a different place (Mayor Tim O’Brien is from Manchester),” said McNamara. “I know about her and her history. She has been on the school board and has a history of caring about New Britain. She has the best interest of New Britain. I hope she fills her office with New Britain people. (O’Brien just hired a deputy chief of staff from Hartford) New Britain should be run by New Britain people.”

“She will do a good job if she has the support of the common council,” said McNamara. “We can’t have a bunch of naysayers who oppose every step she takes. That is worrisome.”

Peter O’Shana, a former Democratic Councilman, said he supports Stewart because he is upset with the way the present administration was run this year.

“The property taxes should have been raised rather than bonding. When I was on the City council the mill rate was in the 50’s,” he said. “To try to keep the mill rate low for an election promise and get us more in debt by bonding makes no sense to me. It takes up your credit line and what if an emergency really comes up?

“I like to support women running in politics and I think she would bring in fresh ideas into the City. She has the youth vote and they have different ideas than us seniors,” said Kirejczyk. “I would like to see her bring new ideas to our City that is very much in need such as jobs. She is also supportive of education. As a retired teacher, I see the importance of education.”

Longtime Democrat and former committee member Daniel Salerno said he is running on the Republican ticket for several reasons.

“Erin wants to work with all citizens. Not just Republicans. She can develop sound, compromising and collaborative government with Democrats. I wanted to run with her because this local Democratic Party has shrunk its tent of inclusion and diversity to a few, and only those who play by their self-perpetuating rules. Not all of the active Party but a few. And most Democrats in New Britain are not active in their Party. They seek other leadership,” said Salerno. “Erin Stewart represents the real future of the young generation of American citizens who must learn how to make difficult choices in difficult times. I am 63 years young myself, and I feel so strongly that we must give younger persons the opportunities to lead, make decisions about their long term futures. Erin Stewart has more experience at her age than many people in their 30’s and 40’s just now entering politics. Erin Stewart cares about this City, is a byproduct of the best of this education system, which is too often wrongly maligned. We graduate success stories every year from New Britain High School. Erin is a success story. She is passionate, brave, is a good communicator and knows New Britain for 26 years. When someone does something for 26 years, they usually get a gold watch! Let’s quit underestimating this very savvy, technologically attuned generation.”

At least two other prominent Democrats said they support Stewart, but refused to give comments due to possible repercussions from the Democratic Party.

Governor Erin? Stewart leaves door open to 2018 run By Chris Fortier – New Britain Herald Monday, May 16, 2016 NEW BRITAIN — The political pundits who had their money on Mayor Erin Stewart challenging Elizabeth Esty for her seat in Congress this fall found themselves swiftly defeated Sunday. In an eight-minute appearance on WFSB-TV’s “Face the State,” Stewart did,…