HYPE’s Civic Engagement Committee Vice chair Nick Pinto and HYPE Deputy Director Kim Lundy interviewed Mayor Stewart for HYPE’s public office blog series. The series focuses on interviewing public officials from different towns in which HYPE members may be interested in running for public office. One of our goals is to provide assistance by offering someone for members to reach out to.

What made you want to run for office?

Mayor Stewart’s involvement in politics began long before she ran for Mayor herself. Her father was the mayor of New Britain for 8 years, and Erin grew up in the political world which is not always kind to the families of those holding office. She remembers a campaign that personally attacked her family, and inspired her to not just be the “mayor’s child,” but an active participant in his campaign. She began to volunteer in 2005, knocking on doors and making calls, and ended up really enjoying the process, so much so that she was offered a job working for former congresswoman Nancy Johnson’s campaign in 2006.

This experience led her to intern for former governor Jodi Rell for two legislative sessions, and after graduation from CCSU, she became a legislative aid for a state senator for five years. During this time, she remained committed to the community she grew up in and called home, volunteering her time, serving on the City Commission for Youth and Family Services, as well as the Commission for Community and Neighborhood Development. Mayor Stewart was also a softball coach at New Britain High School, which would lead her to eventually running for an open position on the Board of Education.

Sitting on a board that controlled over 56% of the City’s tax dollars, Mayor Stewart found a “disconnect between the two bodies, between City Hall and the Board of Education.” It was after a proposal to impose a tax on owners of rental properties, which would effectively increase the cost of renting for many people and families, that she decided to take action. Thousands of residents showed up at a rally to express their outrage at the proposed tax, leaving her wondering how the breakdown in communication could get so bad. She found herself thinking “who is going to change this, because this is bad.” At that moment, she realized that she was going to run for mayor of New Britain.

How far in advance did you choose to run?

Mayor Stewart decided to run in May of 2013, and formally announced that June. Her family and friends supported her decision, and she began to form a campaign team. This team would run her campaign on just $26,000 dollars, a fraction of the 90-100 thousand dollars typically raised for a campaign of this size. Mayor Stewart says it was hard to raise funds, as peopled did not want to donate because they “didn’t think a kid could do it.” Mayor Stewart instead took to the streets, holding community events and small neighborhood gatherings to talk with voters, so she could hear their concerns and share her vision for the city. “Sometimes it’s not all about the money, it’s about the passion,” Mayor Stewart says of her first campaign.
​

What are three tips you have for getting elected?

1) Mayor Stewart recommends door knocking, phone calling, and overall being really active in the community sometime. Sometimes your best champions can be found at PTO meetings or coaching little league. Remember that politics make people intimidated, and often times they don’t see it as what it really is which is a community activity.

2) Always be genuine with people! People are sick of politicians, just be real.

3) Lastly, be transparent with everything you do. You don’t have to keep your  life a secret, people want to know who you really are.
​

What do you think potential candidates should know before deciding to run for office?

Having grown up in the world of politics, Mayor Stewart understands that your life becomes public knowledge, even your life before you held office. She suggests clearing out that old social media account, and making sure what you do have online is a representation of who you really are. She reminds those interested in running that it’s not all glamorous pomp and circumstance; its tough work and you have to be willing to put in the long days. Passion is a huge part of the job, as is being able to talk to people and connect with people. Mayor Stewart says “my job is to be a great communicator,” so it is important to have good interpersonal skills. Lastly, know your town’s government structure. This will help you to realize your own role within the local government, as well as what the roles of others will be.
​

What have you found to be the most important actions that you took or activities that you engaged in during the years leading up to your campaign that laid the foundation for you to be able to run for office?

Along with her experiences on her father’s campaign, as well as the work she did for other campaigns, Mayor Stewart really credits her time serving the community as one of the most important actions she took before running for office. The time she spent serving on boards and commissions, and working with youth and families as a softball coach allowed her to tap into the real concerns of the community, which would inspire her to take action and run for Mayor.
​

How have you leveraged social media while running for office, and now holding office? What have you found to be effective that you would recommend to others?

Mayor Stewart believes that social medial is a great way not only to communicate with a younger generation, but to allow constituents of any age to be able to follow what is going on in the city of New Britain. While she offers open office hours once a month, not everyone is comfortable sharing their thoughts in person. Mayor Stewart has leveraged social medial as “an avenue to get feedback,” in addition to a platform to showcase all of the good things happening in the city. While this use of social media has not been without criticism, she does believe that it has been an effective way to connect more meaningfully with her constituents.
Why is it important for more young professionals to run for office and be more civically engaged?

During her last campaign, Mayor Stewart used the slogan “A New Generation of Leadership.” Her commitment to changing the perception of what a politician looks like is built into her campaign overall. During her tenure, the average age of those running for city council has dropped to under 40 years old. This is truly important for a city that boasts an average age of 34-37 for its residents, and Mayor Stewart is pleased to see the government begin o reflect the community. Many young professionals don’t believe that politics is for them, and sometimes political affiliation is a barrier. Believing that people should run as who they are, Mayor Stewart ran on a fusion ticket with the mindset that “labels are for soup cans.” No matter what party you might be affiliated with, there is really only one way to fill a pothole, and she believes that the focus should be less on political party, and more on who is going to do what’s best for the city.
​

How would you recommend a young professional get involved in the City of New Britain?

While each town or city is different, Mayor Stewart encourages anyone who is interested in getting involved in New Britain to reach out to her office directly. Regardless of political affiliation, there are a lot of seats to fill on various boards and commissions, and she welcomes any and all inquiries. If a seat on one of the boards or commissions is not for you, there are still plenty of ways to get involved in the city, often by volunteering. 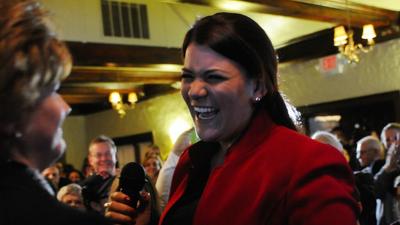 END_OF_DOCUMENT_TOKEN_TO_BE_REPLACED

Thanks to our host and Candidate for Ward 4 Alderman, Robert Smedley. Our best turnout yet!