NEW BRITAIN — Carrying campaign literature and with four members of her slate by her side, Republican mayoral hopeful Erin Stewart went door knocking Tuesday afternoon on the city’s west side.

At the 10 homes where no one was 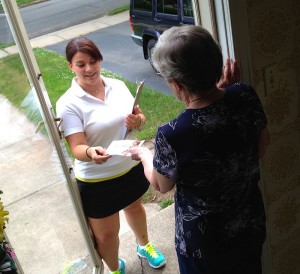 home, Stewart left literature on the doors. The seven people who were at home all said they support the 26-year-old city native. Many homes in the middle-class neighborhood — located in Ward 1 — had signs on the lawns for various members of Stewart’s slate. Ward 1 is considered the most Republican-friendly ward and is represented by the city’s only two GOP alderman. Stewart had a list of active voters — residents who regularly vote in municipal elections — and for the most part knocked only on those doors.

Many of those Stewart spoke to cited the candidate’s youth, enthusiasm and her support for education as their reason for supporting her. Others said taxes were a top concern.

The first person to speak to Stewart was 79-year-old Emily Palmese, a registered Democrat, who said from her front door, “Erin reminds me of her father (former Republican Mayor Timothy T. Stewart). I thought the world of him. I vote for who I think will do a good job and I think Erin is very nice, smart, and I like her personally.”

Echoing a common theme among residents, Susan D’Alfonso said Stewart’s youth is one reason she will pull the Republican lever Nov. 5

D’Alfonso, also a registered Democrat, said, “She is motivated, young and I like her savvy.”

The mother of three, D’Alfonso added that Stewart, a member of the school board, “understands the importance of education and investing in the city.”

When Stewart asked Nancy Fenton for her support this election, the Brady Place resident said she already had it.

“I will vote for Erin because she is young and enthusiastic and has new ideas. It’s time for a change.” Fenton said taxes are a big concern for her because “I am retired, single and money is tight. I know that with Erin if she does not have the information she needs to make an important decision, she knows where to get it.”

A registered Democrat, Marilyn Santos said she voted for Democratic Mayor Timothy O’Brien two years ago — but will vote Republican this time around.

“She (Stewart) knows the town and what is best for us,” said Santos, who works for the school district. “Education is the most important issue for me. She supports smaller class sizes and teachers being highly qualified.”

A registered Independent, Cheryl Fliss believes O’Brien “is not doing the job. He is not communicating with the people.” Fliss, who has three children including a son who attends New Britain High School, added, “She (Stewart) seems very interested in the education of our children and is up on the issues.”

Stewart said she’s campaigned in 65 percent of the city. “I will have covered the entire city by election day.”

END_OF_DOCUMENT_TOKEN_TO_BE_REPLACED

Mayor Erin Stewart received resounding support from the 41 members of the Republican Town Committee for another term and support for her slate of candidates.