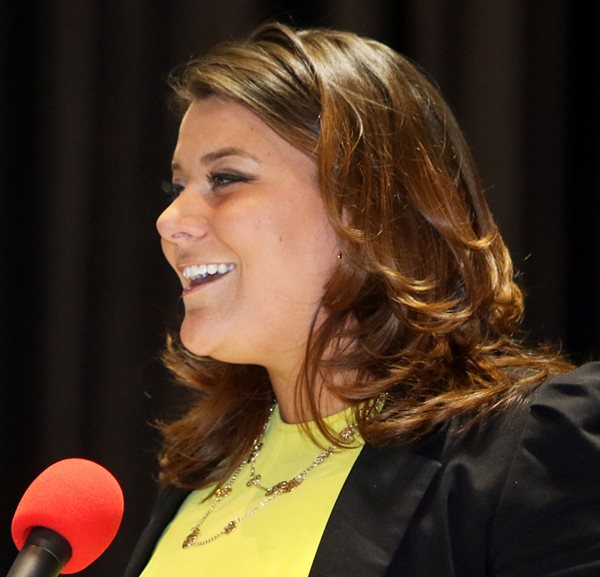 Named last year by Newsmax as one of 30 Influential Republicans 30 And Under, increasingly touted as a candidate for Connecticut governor in 2018, Stewart insisted she is focused “110 percent” on her job and her anticipated bid for a third two-year term in 2017.

“We’re on a more stable path than we were when I took office,” the mayor told us last week during an interview at city hall. “We’ve got a little more under control here.”

Stewart was referring to her “inheritance” from the Democratic mayor she unseated three years ago: a crippling $19 million operating deficit for Fiscal Year 2014 and the threat of $33 million in red ink the following year.

“That’s because I kept talking to them, and we did compromise,” Stewart explained, “I got to reduce the number of city employees and we did agree to a small tax increase.”

By bringing down the size of government through attrition of city employees and a tax increase that worked out to $600-per-year for every citizen in the Hardware City (“It could have been $2,700 had I been unable to reduce the city workforce.”), the Republican chief executive saw the deficit evolve into its present $15 million surplus.

“And we changed completely to HSAs [Health Savings Accounts] to provide health coverage for our [city] employees and — omigosh! — look at the savings!” Stewart exclaimed, “We will have a $6 million savings over the [four-year] life of the contracts.”

Again, she emphasized, “This was the end result of sitting down with the union leaders and explaining the benefits of getting rid of our old [city-provided] healthcare plan. The most difficult part of all was convincing people to go for the unknown. Hey, it was hard for me putting a larger portion of my paycheck into a brand new means of health care.”

Although unaware of what the new Republican president and Congress will do as an alternative if their long-promised repeal of Obamacare comes true, Stewart emphasized that “HSAs have to be a part of it. They work for me and a lot of others. And they save money.”

In contrast to governing in her first term in which city council seats were controlled by Democrats 9-to-6 over Republicans, Stewart’s landslide re-election in ’15 gave her party rule of the Council by 12-to-3 — the largest majority for the GOP since 1965, when the Republican mayor was Paul Manafort (namesake father of Donald Trump’s former campaign manager.)

Should that majority hold and Stewart secure a third term, we asked, would she reduce the city’s taxes?

“No, I will not lower taxes,” she replied, “I won’t be able to. We’re going to end this fiscal year in the black, but an outstanding debt is projected because more than $25 million in bonds are maturing. Someone’s got to pay it off.”

Dealing with fiscal needs by floating bonds, Stewart feels, “is not a good practice and as a result of the last three mayors kicking the can down the road, I have to make the hard decisions.” (Among the three was her father, Republican Tim Stewart, mayor from 2003-11).

With Stewart long dismissing encouragement for her to challenge Democratic Rep. Elizabeth Esty (“I don’t want to be one of 435.”), we asked if she will run for governor in 2018.

“Maybe,” she replied, “Look, our Democratic governor [Dan Malloy] gave Connecticut the biggest tax increase in history. In November, Republicans got a tie of 18-to-18 in the state Senate and came within five seats of winning control of the state House. I could name a dozen Republicans who want to run for governor.”

For now, the mayor insists, she is focused on her third term bid this year. After that, she told us, “Let’s just see what happens.”

“She is the best candidate.” – Yvonne Krosky In this #TestimonialTuesday video, Yvonne Krosky explains why she supports New Britain Mayor Erin Stewart: an energetic leader who has made sound fiscal decisions for her City. #ReElectErin #theLeadershipWeNeed

END_OF_DOCUMENT_TOKEN_TO_BE_REPLACED

Photo Gallery: June 25 Brunch Fundraiser at the Back 9 Tavern