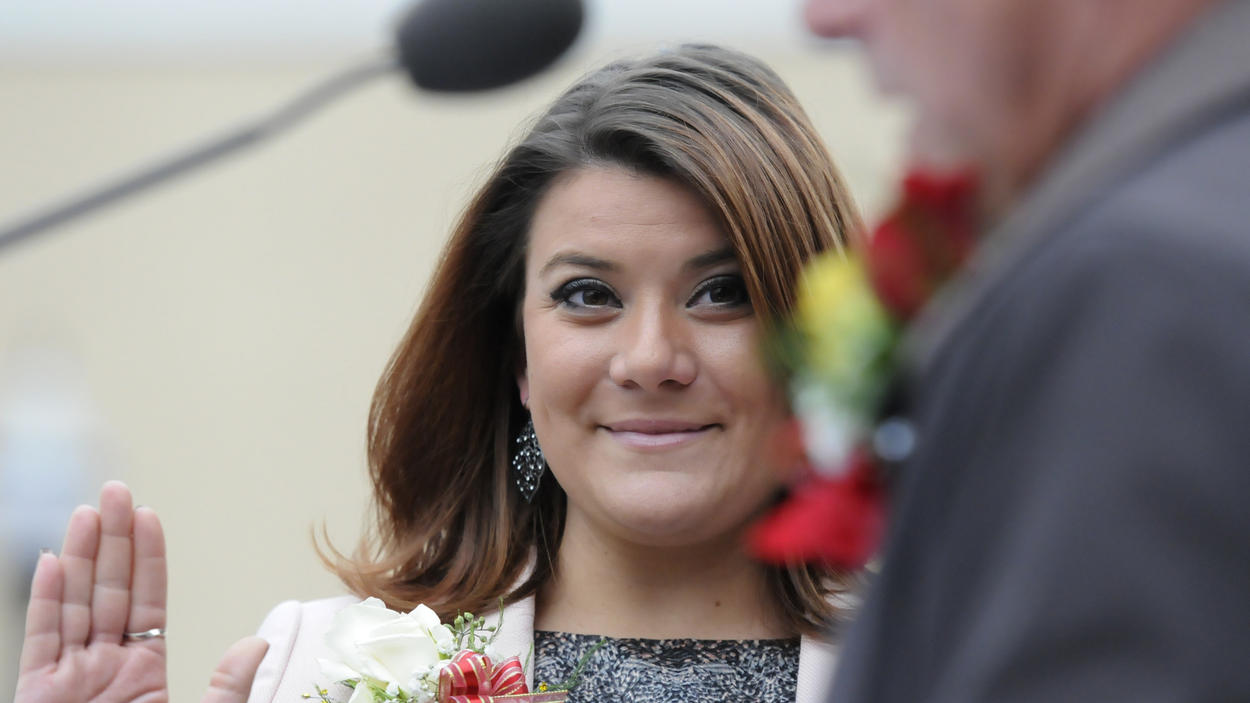 NEW BRITAIN — A week after her landslide, across-the-board Election Day victory, Mayor Erin Stewart promised at her inauguration that she’ll heavily value bipartisanship and political civility in her second term.

Stewart also pledged to continue promoting business development, aid the homeless and practice fiscal restraint in her next two years in office.

“We’ve been given a great responsibility,” Stewart told her new, overwhelmingly Republican city council at a swearing-in ceremony outside city hall Tuesday.

Stewart won re-election with more than two thirds of the vote, and her Republican ticket took 12 of the city’s 15 council seats. She told a crowd of cheering supporters at the ceremony Tuesday that the lopsided victory doesn’t mean an era of one-party rule in the city.

“I look forward to continuing to work with you,” she told Democrats in the audience. “Your voices will be heard loud and clear.

Two years after she became the city’s youngest mayor and only its second female mayor, Stewart said the city has made enormous progress.

Only months after taking office that year, Stewart concluded a hefty tax increase was unavoidable. In her speech Tuesday, she called the move “bitter medicine” that made two years of balanced budgets possible. The most recent budget yielded a nearly $8 million surplus, money that Stewart promised will not be wasted.

Saying that in the winter she’ll put forward a detailed set of goals for her new term, Stewart kept her remarks Tuesday mostly light and celebratory. New Britain High School’s marching band performed on West Main Street, streams of confetti were fired into the air during the inauguration and radio personalities Chaz and AJ were among the speakers.

“Today is all about coming together — Republicans and Democrats, cops and firefighters, Yard Goats and Bees,” Chaz quipped, a reference to New Britain’s new baseball team to replace the departing Rock Cats.

Less than a year into Stewart’s first term, the Rock Cats abruptly announced they’d be leaving for Hartford to become the Yard Goats. The loss was a major setback for Stewart, who quickly said she’d find a way to keep professional baseball in New Britain. This year, the Atlantic League agreed to field a team — the Bees — at New Britain Stadium beginning in April. The city has been promoting their arrival ever since the deal was negotiated.

“Did any of you hear the news that we have a new baseball team?” Stewart said later, drawing laughs from the crowd.

After reciting a list of new businesses that have opened in the past two years, Stewart cited the more professional tone of city government as one of her administration’s major achievements. Partisan bickering had marred New Britain’s political image for many years, and Stewart said at the start of her first term that she’d give — and expect — respect.

“It’s not just what we’ve done, but how we’ve done it,” she told the crowd.

Stewart gave emotional thanks to John Healey, her chief of staff who has been a key adviser and negotiator in her administration. He is leaving to pursue a career as municipal finance and budget adviser.

END_OF_DOCUMENT_TOKEN_TO_BE_REPLACED

Friday, June 21 event at the Blue Room in New Britain