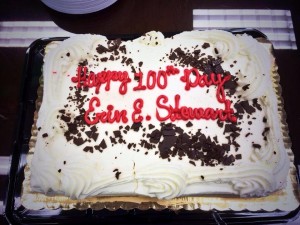 Today, the 26-year-old Republican mayor marks her 100th day in office. In a wide-ranging 45-minute interview, she touched on one of her toughest challenges — dealing with the injuries to city Police Officer Brett Morgan — to her greatest accomplishment and many other issues.

Her greatest accomplishment, the city native said, was “reinstating the Department of Municipal Development. They manage millions of dollars from the federal government that directly help people in need.”

Soon after she took office in November, Stewart said she found herself dealing with a budget deficit and a reorganization plan she said was confusing to many. Like many of her predecessors have done soon after they’ve taken office, Stewart instituted a hiring and spending freeze that remains in effect.

Today, much of her time is spent deciding how to handle a deficit that was larger than many initially thought. She said all options, including layoffs and furloughs of city employees, are on the table. Stewart said she’d announce by early April what her specific plans on are to deal with the city’s financial woes.

“If not the biggest obstacle, the deficit is clearly one of the biggest,” the mayor said. “I cleaned house (to address it). I hired a brand-new financial team. That includes a financial advisor, a new underwriter, a new bound counsel and, hopefully, a new auditing firm.

“You need professionals in place here to help us out of the mess we are in,” the mayor added. “There is a gaping hole in our city budget and it will take these professionals to help us find creative ways to keep us afloat.”

Stewart said she’ll make sure “we are spending the people’s money wisely. I’ll never hear the end of it if I don’t, and the taxpayers deserve it.”

The mayor often reiterated that her office will be transparent with the budget and will offer solutions, saying, “My job is not just to kick the can down the road. It is to set the stage for years to come and to ensure we are on solid ground. No more BS.”

The mayor — who campaigned on having a close working relationship with city aldermen and allowing more public access to her office — has instituted office hours once a month. “I believe I’ve opened lines of communications with the aldermen. I said during my campaign that everyone would have a seat at my table and that’s held true.”

The daughter of four-term Mayor Timothy T. Stewart, Stewart said she uses social media to connect with the public. “It allows me to reach a younger generation,” she said. The mayor has 2,000 followers on Facebook; 900 on Twitter; and 1,000 on Instagram.

On economic development, Stewart said, “We’ve renewed the conversation with Costco and Billy Carroll (the city’s business development director) and I have been talking weekly about prospective businesses and open space to market to businesses.”

Clearly, the most emotional time for the mayor has been dealing with the aftermath of the injuries Morgan sustained when he was dragged by a vehicle driven by an alleged drug dealer.

“It’s a scary feeling to get woken up in the middle of the night by the police chief, to receive a phone call with unclear answers on whether or not one of our officers will live,” she said. “There has been such an incredible outpouring of support for him and his family.”

Asked for one thing the public would be surprised to learn about her, the mayor said with a smile, “I dye my hair. This (burgundy/auburn) isn’t my natural color.”

END_OF_DOCUMENT_TOKEN_TO_BE_REPLACED

by Stewart for New Britain
May 7, 2015 Erin Stewart