NEW BRITAIN — You might call it remedial language arts training: Students who are used to swearing at teachers will clean up their language or pay a price, Superintendent Kelt Cooper said. 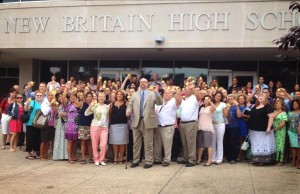 And forget about showing up for class in sagging-to-the-knees pants.

“Don’t talk smack, don’t show crack” sums up the stricter discipline policy that principals have been told to enforce this year, Cooper told a meeting of more than 600 teachers preparing for the start of classes next week.

The line drew a laugh from most of the educators in the New Britain High School lecture hall, and they applauded loudly when Cooper said the city schools are finished with ignoring disruptive or abusive behavior by students.

“I believe somewhere, people gave up here and let it go on — I’m saying ‘enough of that,’ ” Cooper said. “I’ve heard from teachers with kids getting up in their face and saying ‘[expletive] you’ and ‘[expletive] this.’ That’s going to stop.”

Cooper, who was recruited from Texas in mid-2012 to turn around the city’s underperforming education system, is looking to build on improvement in nearly all areas of the Connecticut Mastery Tests.

He’s restructured the schools by returning to a neighborhood school organization, simplifying report cards, shuffling some administrators, cracking down on truancy and doing away with staff development sessions that cost a half day of classroom work every week.

While touring a school last year, Cooper stopped a student whose underwear was showing because his pants sagged so low. The student cursed at him, then told the principal, ” ‘I didn’t know he was the superintendent. I thought he was just a teacher,’ ” Cooper said.

“There’s just no justification for that at all. I don’t care if it’s the custodian,” said Cooper, who vowed that students who swear at staff this year will “be out of school for five to 10 days.” The superintendent said each student suspended that way will be sent home with a bar of soap as a symbolic message to their parents.

To illustrate his point, Cooper handed out bars of soap to several dozen teachers who stood behind him outside the high school entrance after the meeting ended. They posed for photos to emphasize the idea that the staff will be united in upholding stricter rules on behavior.

Cooper said he understands that some youngsters come from homes where profanity is common, but said that’s no excuse for it in school.

“I’m counseled out,” he said. “Sometimes you’ve got to get the bar of soap and say ‘This is how it really works.’ ”

School board President Sharon Beloin-Saavedra encouraged the faculty to look at the first day of school, Sept. 3, as a fresh opportunity.

The school system has been plagued by staff cutbacks and tight budgets for years, but this spring landed a hefty budget increase and a one-time infusion of millions of dollars for new textbooks, computers, software and building repairs.

“There’s so much optimism this year. We now have the teaching tools at hand,” Beloin-Saavedra said. “We will change the trajectory of student achievement together.”

Chief Academic Officer Sharon Locke pointed to dramatic improvement in standardized test scores at DiLoreto School as the results possible throughout the district. At elementary and middle schools, the neighborhood school policy means that many teachers will be working with new colleagues, serving under new principals and teaching different students.

“Be fired up about this school year, it’s going to be a great year,” she told the staff.

Cooper called on teachers to steer away from negativity, to stay united with the rest of the staff and administrators in their school, and leave personal frustrations or troubles aside when they show up for class each morning.

“Kelt is awesome, and he’s getting the job done,” school board member Erin Stewart said afterward.

END_OF_DOCUMENT_TOKEN_TO_BE_REPLACED

New Britain — The decades after World War II were unkind to many Connecticut cities, New Britain among them. The Hardware City lost jobs, was carved up by highways and saw residents depart for the suburbs. Its once bustling downtown began to look desolate, almost like an archeological site. Not anymore. Downtown New Britain is steadily coming back. Streets have been…