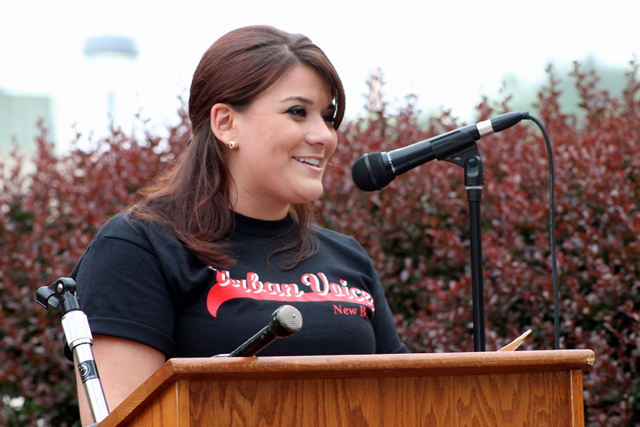 What is a New Generation Republican?

Mayoral Candidate Erin Stewart doesn’t consider herself a typical Republican running for office. Stewart calls herself a “New Generation Republican.” So what does that mean?

“Being a New Generation Republican means to me I am welcoming everyone to the table,” said Stewart. “I welcome Democrats, Republicans, Independents and Libertarians to the table. I will straight talk everyone with no false promises to special interest groups and will have an open government for all – which is not what we have.”

She said she will focus on transparency and wants to restore the Mayor’s Open Office Hours.

“That (open office hours for residents) has ceased to exist,” she said. “The main goal is to make New Britain a better place to live, work and raise a family. To that end, we all agree there is no Democracy in New Britain right now. It is a one party rule and that is not healthy for one government.”

Stewart said she is not a typical Republican as people consider Republicans.

“The stigma is that the party has a negative outlook. People think of the big bad guys in the federal level like George Bush and other people who I myself disagree with,” she said. “I believe in smaller government, lower taxes, giving people an opportunity to have the American Dream and those fundamentals of the Republican Party are the ones I do agree with.”

She said she considers herself ‘socially modern’, but at the end of the day party labels should not matter.

“We should be all working to make New Britain a better place to be,” said Stewart. “We call ourselves the ‘Republicrats’. It’s not a bad way to claim our slate.”

She said when the campaign slate meets there is long drawn out conversation from many different sides.

“That is healthy,” Stewart said. “What New Britain residents want is a government that is accessible and responsive to them. One that knows what they need. They need a government that is easy to understand and navigate. I don’t think we have that now. What we have is tax hikes and secret meetings.”

Stewart said a small circle of insiders should not run the City. The average person needs to have a role in running the City.

“There is division in the City and there is no one party that is going to fix that division except bringing in a leader,” said Stewart. “The City needs a leader that will bring everyone together. One of the biggest issues under the current administration is that people are being driven out of the City by taxes.”

She said there is no incentive for younger families to stay in New Britain.

“A new generation of leadership will take aim at these issues. At the end of the day, we all love New Britain. We want to continue to work here, to raise our families here and to maintain our homes here in the City we love, grew up in and were born in,” said Stewart. “You must have leadership quality regardless of party.”

“Everyone tells me they are sick and tired of the blame game. People tell me our leaders need to just do the job. It’s no one else’s fault if you can’t get it done. I don’t want to play politics. I just want to get the job done,” she said. “I don’t like personal, petty attacks. It does not make for a healthy work environment.”

“But at the end of the day we are similar in that all politics is local and we understand that. Every move that you make affects 73,000 people,” Stewart said. “There is no Democrat or Republican way.”

“Erin wants to work with all citizens. Not just Republicans. She can develop sound, compromising and collaborative government with Democrats,” said Salerno. “I wanted to run with her because this local Democratic Party has shrunk its tent of inclusion and diversity to a few, and only those who play by their self-perpetuating rules.”

Stewart said people are associated with certain parties such as Democrat or Republican because that was what their families were.

“Older voters tell me that we encompass the ideas that the Democratic Party encompassed when it was the real Democratic Party here in New Britain,” said Stewart. “All the stuff that goes on in Washington DC is not the Republican party that I align myself with. The bottom line is I care about New Britain. We have a two party system and it doesn’t always fit.”

Stewart said she would run as an Independent if she could, but in reality she wouldn’t be able to win. People vote for either the Republican or Democrat. She said she can’t be somewhere in the middle. There is no party for that.

“I truly want to change the GOP label from ‘Grand Ole Party’ to ‘Government of the People’,” said Stewart. “I want to encompass everyone’s idea and give them a seat at the table.”

Stewart said she will focus on the tax hikes and misguided policies in the City under Mayor Tim O’Brien’s term.

“Every single person saw a tax increase in their car taxes,” she said. “Being open and honest about that is step one. It’s not fair to tell people one thing and then do another.”

She said at the end of the day it is her job to make a decision that is best for all people, not just one party.

“I think we can take these last two years and see them as a detour. It does not have to be our destiny,” Stewart said. “That choice is yours to make.”