This is the first of three stories detailing the views of Democratic Mayor Timothy O’Brien and his challenger, Republican Erin Stewart. This story focuses on downtown revitalization. The other stories will highlight education and civility in government.

NEW BRITAIN — The two candidates for mayor agree that a vibrant downtown is vital for the city’s future. But Democratic Mayor Timothy O’Brien and his Republican opponent, Erin Stewart, disagree on how to get there.

The mayor maintains his administration has a strong record of moving the downtown forward — citing the ongoing streetscape project; expansion of arts in the city’s center; and the ongoing development of several blighted and abandoned properties.

“I’d definitely give our administration an ‘A’,” the mayor said in a recent interview. “I’ve taken good ideas already out there, which I was working on as state representative, and moved them forward into action.”

Stewart, a Board of Education member and daughter of former Republican Mayor Timothy T. Stewart, said there needs to be more planning for downtown development and said infrastructure is key.

Specifically, the GOP candidate said, “you must have an open-door policy with a smiling face at the front door of City Hall saying you are welcomed here. You want to incentivize businesses and not penalize them with high taxes and costs and that has been what is going on.”

The mayor, who is seeking his second term, said residents have noticed changes in the city.

“People continue to tell me that they see more construction in New Britain than ever before,” said the mayor, adding, “I am proud that the leadership of our administration has made it possible.”

In addition to the ongoing streetscape project — which includes plantings, brick pavings and shrinking the roadways so the city is more walkable — the mayor said his administration has actively marketed the downtown. And it has shown results, he said.

The mayor cited the blighted Berkowitz Building near the beginning of Little Poland as a prime example. The city has signed off on a developer to build condominiums on the site, among other things.

“It’s also part of fighting blight,” said the mayor, who lives in the heart of downtown. “We took a building that was languishing and put it under city control and we are in the process of developing it now.”

If elected, Stewart said she would immediately work to expand the city’s enterprise zone “to entice companies to relocate to New Britain.”

“We need to build on what we already have. We do not have a master developer for a downtown revitalization project and we need that.” Stewart said. “We have a downtown plan that Arete (redevelopment firm) created for us under my dad’s administration. But, it is sitting on the shelf creating dust.”

“We have CCSU (Central Connecticut State University) and we should have kids flocking to eat at our restaurants and shopping at our stores,” said Stewart. “I’d like to see more shopping, like clothing stores and restaurants. Overall, in thinking about what downtown should be, it is almost insignificant when our finances are so bad. We’ve got to get our fiscal house in order, first and foremost.”

The mayor said his “idea is to have a city center with robust businesses, shops, restaurants and art venues and have people living in the downtown like I do.”

O’Brien added that CCSU is a big part of the rebirth of downtown.

The mayor supports having housing for CCSU students downtown — specifically at the old police headquarters on Columbus Boulevard. “We are also planning for CCSU’s larger presence downtown. CCSU already has the ITBD Building downtown and we could conceivably have classroom space too. There are a lot of opportunities.”

Stewart said she’d also support housing for CCSU students downtown, but not at the site of the former police headquarters.

This story was originally published in the New Britain Herald.

Stewart gives senior a ride as way to emphasize need for volunteers NEW BRITAIN – Ruby Bordeaux, 89, cruised to One Herald Square in style recently as Mayor Erin Stewart gave the city resident a lift to her dialysis appointment. Stewart was volunteering her time to Senior Transportation Services, a nonprofit devoted to helping people 55 and over live independently…

END_OF_DOCUMENT_TOKEN_TO_BE_REPLACED 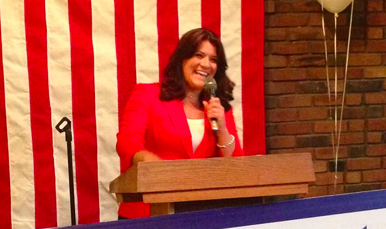 Erin Stewart delivered remarks at her Campaign Kickoff for Mayor of New Britain at Whinstone Tavern on June 20, 2013.