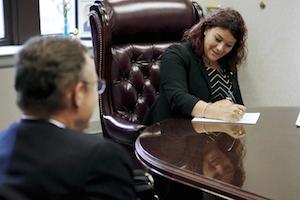 Mayor Erin Stewart signed a contract allowing the warehouse club store off Hartford Road to break ground today on the Stanley Golf Course. The project had wriggled its way through three mayoral administrations, suffered setbacks and overcame a determined opposition from local environmentalists.

“It’s been complicated throughout,” said Stewart. “But, I’m glad the worst is over. I’m thrilled Costco stuck around through all of this.”

John Healey, Mayor Stewart’s chief of staff, told the Herald he had heard Costco had been talking to other towns about a store.  Many of them were offering incentives to entice companies.

“If we have the ability to do something that doesn’t take any money out of the taxpayer’s pocket in order to ensure we would get Costco here and shovels in the ground by the end of summer, that’s something the mayor felt she had to do,” Healey said. “Failing that, we risked losing the project altogether.”

“The positive end will be the groundbreaking on Wednesday with 250 well-paying jobs to look forward to,” Stewart said. “Bringing jobs to this community is an incredible feeling. I think Costco is going to move very quickly.”

Corporation Counsel Gennaro Bizzarro said on Tuesday the mayor signed the quick claim deed, the instrument that conveys title from the city to Costco. The mayor also executed a series of easements related to the construction area that had been negotiated over the past few months.

“The transaction may seem simple on the surface,” Bizzarro said, “but when you have something of this magnitude there are many details on language and logistics. Costco will grade holes [at Stanley Golf Course] then turn the work back to the city.”

The mayor said she was one of the last golfers to play “The Red Nine” holes at Stanley on Monday, which are now closed for the season. Stewart said she anticipates the holes will be open by next summer.

The mayor hopes a grant for $865,000 for off-site improvements will be approved at the state’s Sept. 26 bond commission meeting.

Former Mayor Timothy O’Brien called the Costco signing “the fruition of an enormous amount of work through numerous, difficult steps.”

O’Brien thanked Gov. Dannel Malloy who worked with him to help get the project done.

“Without the governor’s help it would not have been possible to get these jobs created in New Britain,” O’Brien said. “I’m very proud of the work I did to ensure those jobs will go to New Britain residents.”

During a special council meeting on Aug. 7, several speakers urged the council to pass the tax abatement. Jim Sanders Jr. called Costco “a good company with good jobs and benefits are great.”

Attorney William Rivera reminded the council that if only 75 city residents are hired out of the proposed 250 jobs it will be 75 people who will be able to pay for their gas or milk.

Costco’s Attorney Tom Cody pointed out that the tax abatement would not cost the city.