Out of the cold: Building on Whiting Street to be open for homeless

NEW BRITAIN — Saying “nobody should be out in the cold,” Mayor Erin Stewart has announced that the homeless will be able to sleep in a building on Whiting Street beginning Tuesday night.

“My heart melts for people who do not have a place to call home,” the mayor said from her office Friday. “The city will be doing community outreach to get the word out.”

The 11,556 square-foot building is located at 145 Whiting St., across the street from the Franklin Square Manor apartments. Half of the building will be used to house upward of 50 homeless people a night, from 7 p.m. to 7 a.m., beginning Tuesday and running through March 31.

Frank Maccarone, who owns the 28-year-old building along with his partner, Sal Giarratana, said Friday that offering the space to the city at no charge was the right thing to do.

“We are just New Britain guys who want to help out,” said Maccarone, who met with the mayor and other homeless advocates late Thursday to discuss the city’s homeless overflow population. “We don’t want to see anyone die. There are homeless in New Britain that die. Here in New Britain, we have each other’s back. If we take care of each other, we’ll all do better.”

The Whiting Street location became vacant last year after the Hispanic Counseling Center — which was affiliated with the Hospital of Central Connecticut — moved out. Maccarone said the building is “alarmed, up to code and has all emergency exits. There is plenty of space, and there is a secure entrance. The only thing to do now is to put showers in the facility.”

The homeless — including men, women and children — will sleep on one of 50 cots. Two employees of the Friendship Center will man and run the facility during 7 p.m. to 7 a.m. each night.

“We are only utilizing half the space right now,” Maccarone said. “We can use the other half [housing another 50] if we have to.”

If the Whiting Street facility is filled to capacity and a homeless person asks for a place to stay for the night, the mayor emphasized that “no one will be turned away. We will find someplace for them to go.”

The most recent count of homeless in New Britain by the federal Department of Housing and Urban Development, taken in January, was 173 people, up from 156 in 2011. The number reflects individuals who live in the Friendship Center, Salvation Army and transitional housing provided by Community Mental Health Affiliates, along with unsheltered people on the streets.

Mary Smith Floyd, housing and employment liaison for the Mayor’s Workplan to End Homelessness, said Friday that Whiting Street “is an ideal location. It’s very close to the Salvation Army and the Friendship Center and downtown. This will help out a lot and it’s supposed to be cold next week, so it’s very timely.”

Ellen Simpson, executive director of the Friendship Center, said the center “will try to coordinate to get breakfast” for the homeless.

“Frank Maccarone is wonderful to offer this,” Simpson said. “He cares and helps the homeless community a lot. We named him landlord of the year at our annual meeting several years ago.”

Those looking to volunteer at the new homeless shelter are asked to call the mayor’s office, weekdays, at (860) 826-3303. 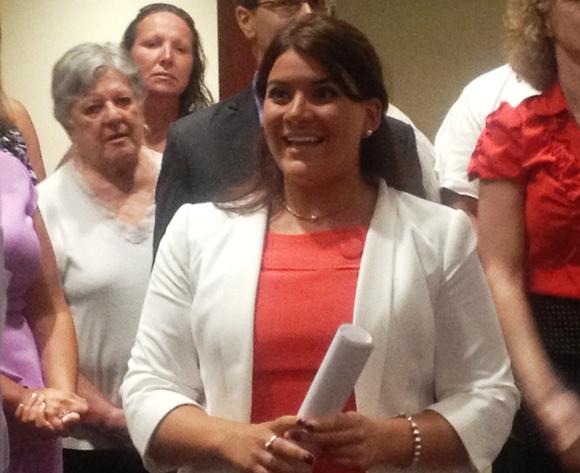 END_OF_DOCUMENT_TOKEN_TO_BE_REPLACED

If you’re spending other people’s money – you’d better be smart about it.

Erin Stewart has been in office for one week and is already making big changes.