NEW BRITAIN — Most people shudder at the sight of a golf course divot. However, when a phalanx of shovels during the Costco groundbreaking dug up small piles of dirt Wednesday at Stanley Municipal Golf Course someone shouted out, “It’s all good.”

And it was. Just ask Mayor Erin Stewart. 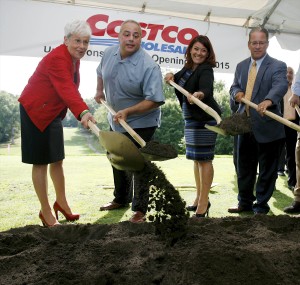 “I’m so pleased Costco has finally gotten to this point,” Stewart said. “As mayor of the great city of New Britain I couldn’t be happier.”

Mayor Stewart; Lt. Gov. Nancy Wyman; Tim Stewart, president of the Greater New Britain-Berlin Chamber of Commerce and Joe Montesano, project coordinator for Costco Wholesale all had something to say about the four-year effort to bring the warehouse store to a site south of Westfarms Mall.

Costco is expected to open for business in the fall of 2015.

Stewart hailed the promise of 225 jobs in a city where the unemployment rate surpasses the state’s. New Britain residents will have first priority for jobs. Costco’s average wage is $21 an hour; a cashier with five years’ experience earns more than $50,000. Wyman pointed out that, in addition to the Costco store jobs, the project will create construction jobs for many more workers.

Former Mayor Tim Stewart recalled four years ago when Bill Carroll, director of development for the City of New Britain, came to his office with a local attorney and asked Stewart what he thought about a Costco near the Target store. Though Stewart favored the project, he hesitated when he later realized it meant tearing up part of the city’s popular golf course. Negotiations eventually involved reconfiguring and fixing up the course.

Carroll said he was encouraged to learn that Costco was one of Mayor Erin Stewart’s first priorities. He admitted that it was “without a doubt the most difficult developmental project in a long time. It was a mission on the part of many people who thought this was a great opportunity. With hard work and determination and people in the right place it showed that projects of this magnitude can get done.”

The mayor said the project “got done” because state, federal and local government worked together to make it happen. She thanked members of the Common Council who had voted for the project and city attorneys Seth Feigenbaum and Gennaro Bizzarro.

But the project almost didn’t get done.

Montesano confirmed to the Herald that in late August Costco was ready to walk. Without a “go ahead” from the city council Costco officials were considering building a store in another community.

“Without Mayor [Erin] Stewart’s tenacity we would have never crossed the finish line,” Montesano said. “So many people at the local level helped us get this job done, people like Attorney Tom Cody [of Robinson & Cole] and Bill DeMaio [New Britain’s parks and recreation director].”

DeMaio said with Costco people sodding and working with his staff at Parks & Rec weather permitting the “Red Nine” holes at Stanley should be open in the spring.

‘Challenge the Status Quo’ New Britain Mayor Erin Stewart has challenged the status quo as a female politician and the youngest mayor in Connecticut since she winning election four years ago at age 26. Stewart became interested in politics after working for former Connecticut Congresswoman Nancy Johnson and former Governor M. Jodi Rell. “It was an incredible experience to have such…

END_OF_DOCUMENT_TOKEN_TO_BE_REPLACED

New Britain Historical Society President Amy Kirby said the City announced new rules this week for those interested in purchasing the Hatch Building that purposely eliminates the society from acquiring the building.